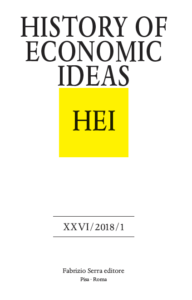 Stefano Figuera
“Money and the Financing of the Economy in James Steuart”
97-121
DOI: 10.19272/201806101005
Abstract. James Steuart’s contribution to the money and credit question is of great interest. He understood the central role of money in the economic system of the time and envisaged a new way of conceiving money and understanding the role of monetary policy.
Steuart in fact emphasized the importance of money not only as an means of exchange but also and above all as an instrument of financing. His monetary analysis therefore revealed a recognition of the endogenous nature of the money supply, which differed from that of other thinkers of the period and which opened exciting new avenues of analysis.
JEL codes: B12, B31, E52.
Keywords: Steuart, Bank, Credit, Money, Financing.

Anna Azzurra Gigante & Claudia Sunna
“Institutions and Development Economics: An Analysis of a Missing Correlation”
123-157
DOI: 10.19272/201806101006
Abstract. Starting from the second half of the 20th century, New Institutional Economics became one of the most influential economic areas of enquiry through the seminal contributions of Coase, Williamson and North. This strong amount of research was defined as a «renaissance» of old institutionalism developed by Commons, Veblen, Ayres and Mitchell. This study analyses contributions by development economists on institutions. The reason that prompted this investigation is twofold. Firstly, as it emerges from the seminal contributions of Hirschman, Rostow and Lewis, development economists offer an in-depth analysis of the role played by institutions in the development processes. Secondly, the common features between the institutional analysis elaborated by development economists are highlighted as well as that offered by Old Institutional Economics. Such analytical convergence originated from the necessity to study complex processes – the structural changes in many countries after the World Wars and the promotion of economic development in poor countries – where noneconomic factors play a crucial role and a holistic and historical approach is needed.
JEL codes: B15, B25, B52.
Keywords: Institutional Economics, Development Economics, A.O. Hirschman, W.W. Rostow. W. A. Lewis. 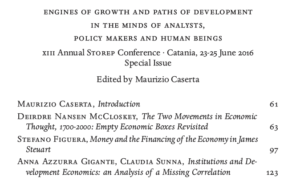