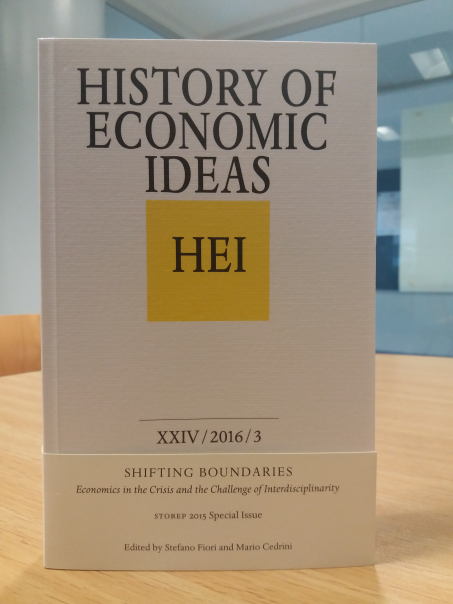 SHIFTING BOUNDARIES, WITHIN AND OUTSIDE ECONOMICS
M. Cedrini and S. Fiori

The article introduces the Special issue of History of Economic Ideas with selected papers from the 12th Annual Conference of the Italian Association for the History of Political Economy (STOREP), held in Turin, 11-13 June 2015.

Is History of Economics What Historians of Economic Thought Do? A Quantitative Investigation
M.C. Marcuzzo and G. Zacchia

Abstract
This paper presents a quantitative investigation into the history of economic thought. Building on previous work (Marcuzzo 2008; 2012), we propose an empirical study in with the aim of describing the dynamics of changes in HET in recent years, detecting three trends: 1) a sort of ‘stepping down from the shoulders of giants’, namely a move towards studies of ‘minor’ figures and/or economists from a more recent past; 2) the blossoming of archival research into unpublished work and correspondence; 3) less theory-laden investigations, connecting intellectual circles, linking characters and events. Using data from Econlit we show the evolution of the overall publication of HET articles (1955-2013) and of HET fully or partially specialized journals (1993-2013); for the latter, by devising proxies which are amenable to quantitative assessment, we demonstrate that there is some evidence to support these claims.

The Complex Nature of Economic Liberalism
A. Kirman

Abstract
Economic theory has developed in such a way as to be consistent with the socio-political liberalism which became dominant after the Enlightenment. The doctrine of «laissez faire», and the argument that leaving people insofar as possible to their own devices would lead to a socially desirable state was based on the conviction that an Invisible Hand would lead society to such a state. As economic theory developed it was never able to give a formal justification for this assertion. It was claimed that this would happen but the discipline was confined to study the welfare properties of equilibrium states without explaining how they were attained. Thus crises were said to be generated by exogenous shocks and did not come from within the system. Changing our two hundred year old paradigm to thinking of the economy as a complex adaptive system allows us to consider economies out of equilibrium and the fact that they may self organise into states which are far from optimal. Such systems with their feedbacks are unpredictable and policy measures can generate unexpected consequences. Accepting this may lead to more realistic and more modest economic theory.

Abstract
This paper examines the explicit and implicit arguments in Chicago School economist Edward Lazear’s 2000 defense of economics imperialism using standard international trade theory. It associates that an ostensible defense with interdisciplinarity, or the idea that the social sciences are relatively autonomous, but argues that this defense functions as a mask for a more conventional imperialist strategy of promoting Chicago School neoclassicism. Lazear’s argument also created a dilemma for Chicago regarding how it could espouse interdisciplinarity while actually operating in a contrary way. I argue that the solution to this dilemma was for mainstream economics to rebuild economics imperialism around a performative conception of neoclassicism as a theory that always sees the world in its own image. This strategy, however, suffers from a number of problems, which upon examination ultimately lead us to multidisciplinarity, or the idea that the sciences can have transformative effects on one another. This latter conception can be associated with a complexity economics approach as an alternative view of the relation between the sciences. The paper argues that this view provides a basis for pluralism in economics.

Abstract
Rational choice theory, as the paradigmatic core of economics, comprises two kinds of assumptions, the motivational assumption that individuals act self-interestedly and the cognitive assumption that in pursuit of their self-interest they act rationally. The self-interest assumption has often been the target of criticism, more recently from behavioral and experimental economists. The present paper focuses its critique on the cognitive component of rational choice theory. Its main purpose is to contrast the standard assumption of rational choice with a theoretical outlook that emphasizes the role of rules, both in individual conduct and in politics, as a device for coping with man’s cognitive limitations.

The Politics of Neoclassical Economics: Insights from Foucault’s History of Governmentality
C. Gürkan

Abstract
This paper attempts to shed light on the problematic nature of the ongoing disciplinary division within social sciences. Disciplinary barriers between social disciplines are nonetheless repeatedly challenged by attempts to cross boundaries and hybridization processes. In economics, we can detect two distinct methodological practices – an imperialistic one and a pluralistic one. The former aims at interdisciplinarity in a limited range of hybridization. The latter supports more possibilities, feasible with the evolution of disciplines, but it remains largely mono-disciplinary. In this respect the aims of this paper are twofold: (1) to show that, unlike natural sciences, there are no ontological reasons for disciplinary divisions in the social sciences; and (2) to outline some implications of all this, by contrasting the pluralism project in heterodox economics and the parochial methodology of economic imperialism.

Pareto-efficiency from Pareto to 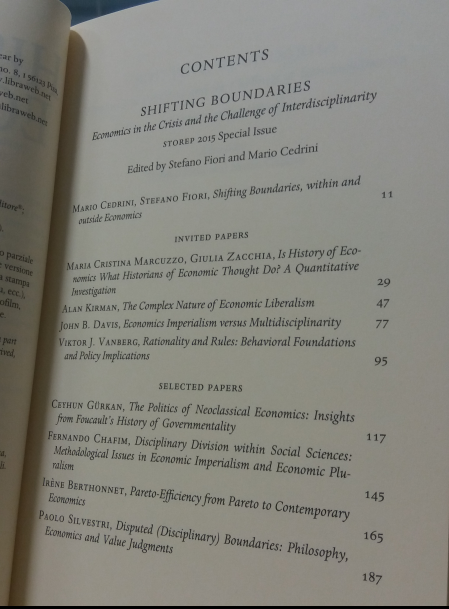 Abstract
The paper focuses on the history of the integration of the Pareto-efficiency concept inside contemporary neoclassical economics. Its main objective is to cast light on the epistemological debates surrounding the exact scope of the criterion which took place all along the 20th century. Those debates are dealt with through the question of the successive names given to the Paretian criterion initially named a maximum of ophelimity.

Abstract
This paper aims to address the following two questions: a) what is the logic of the kind of discourse that seeks to found, demarcate or defend the autonomy or the boundaries of a discipline; b) why does this discourse, whether methodological, ontological or epistemological, sometimes turn into normative, dogmatic-excommunicating wrangles among disciplines, schools or scholars? I will argue that an adequate answer may be found if we understand: 1) disciplines as institutions and, therefore, as dogmatic systems, where scholars’ discourse often takes the form of a legitimizing discourse regarding the founding Reference of their own discipline; 2) that scholars speak in the name of that very foundation, with which they closely identify; 3) that the issue of the legitimacy of a discipline cannot easily be separated from the issue of identity and, therefore, of a scholar’s legitimacy; 4) that the excommunication may arise not only when the founding Reference is absolutized, but also as a form of self-defense of a scholar’s identity-legitimacy. To understand these claims I will re-examine three paradigmatic positions: the methodological, ontological and epistemological considerations put forward by (and the debates between) Pareto, Croce and Einaudi – with specific reference to the demarcation between philosophy, e