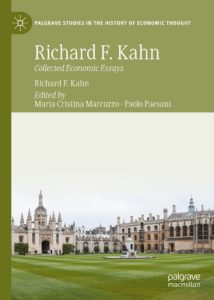 This book brings together important essays by Richard F. Kahn, Keynes’s pupil and literary executor and one of the most influential economists in the Cambridge tradition. The essays address issues – ranging from imperfect competition and pricing mechanisms to inflation, unemployment, and the regulation of international trade and finance – that remain highly relevant and topical.

They are addressed from a Keynesian perspective, with exploration of the interface between economic theory and policy. The introduction, by the editors, places the essays in their own context while at the same time offering guidance in understanding their relevance to the present scenario.

Richard F. Kahn: Collected Economic Essays is a fitting companion to the 1972 collection of essays, edited by Kahn himself. It will be of interest to scholars and students as a guide to the work of an outstanding economist and a great figure in the Keynesian tradition.

“Richard Kahn is of great interest to historians of economics because of his role at the centre of two of the central developments in economics in the 20th century: imperfect competition and the Keynesian revolution. This collection, including an important, previously unpublished paper from 1933, and the very helpful editorial introduction successfully illustrate the evolution of Kahn’s thinking from the 1930s to the 1970s.”
—Roger E. Backhouse, University of Birmingham and Erasmus University Rotterdam

“A long-awaited second collection of Richard Kahn’s essays including his later reflections on Keynes and analysis of the postwar international economy and problems of unemployment and inflation – accompanied by an excellent introduction by the editors.  An important contribution to the history of economics.”
—John B. Davis, University of Amsterdam and Marquette University“
This valuable and fascinating collection documents Richard Kahn’s central role in the imperfect competition and Keynesian revolutions in economics, making conveniently accessible his articles on imperfect competition, on Keynes, and on inflation and unemployment, including a pathbreaking 1933 paper on imperfect competition previously published only in Italian translation. The helpful and informative editorial introduction provides a useful guide to the nature and importance of Kahn’s contributions. Every economist interested in the imperfect competition and Keynesian revolutions should have this book.”
—Robert W. Dimand, Brock University

Maria Cristina Marcuzzo is Honorary Professor at La Sapienza University of Rome and a Fellow of the Italian Academy of the Lincei.

Paolo Paesani is Associate Professor at the University of Rome Tor Vergata where he teaches History of Economic Thought and Economic Policy.

The Problem of Duopoly
Pages 51-70

‘The General Theory of Employment, Interest and Money’
Pages 119-160

Unemployment as seen by the Keynesians
Pages 225-239

Thoughts on the Behaviour of Wages and Monetarism
Pages 241-252