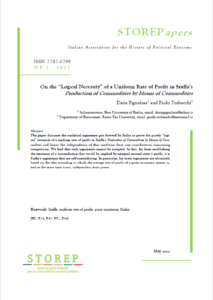 Daria PIGNALOSA and Paolo TRABUCCHI, “On the “Logical Necessity” of a Uniform Rate of Profit in Sraffa’s Production of Commodities by Means of Commodities“

The paper discusses the analytical arguments put forward by Sinha to prove the purely “logical” necessity of a uniform rate of profit in Sraffa’s Production of Commodities by Means of Commodities and hence the independence of that condition from any consideration concerning competition. We find that such arguments cannot be accepted. In fact, far from establishing the existence of a contradiction that would be implied by unequal sectoral rates o profit, it is Sinha’s arguments that are self-contradicting. In particular, his main arguments are ultimately based on the idea according to which the average rate of profit of a given economic system is, and at the same time is not, independent from prices. 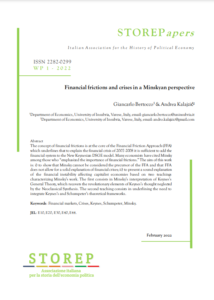 The concept of financial frictions is at the core of the Financial Friction Approach (FFA) which underlines that to explain the financial crisis of 2007-2008 it is sufficient to add the financial system to the New Keynesian DSGE model. Many economists have cited Minsky among those who “emphasized the importance of financial frictions.” The aim of this work is: i) to show that Minsky cannot be considered the precursor of the FFA and that FFA does not allow for a solid explanation of financial crises; ii) to present a sound explanation of the financial instability affecting capitalist economies based on two teachings characterizing Minsky’s work. The first consists in Minsky’s interpretation of Keynes’s General Theory, which recovers the revolutionary elements of Keynes’s thought neglected by the Neoclassical Synthesis. The second teaching consists in underlining the need to integrate Keynes’s and Schumpeter’s theoretical frameworks.