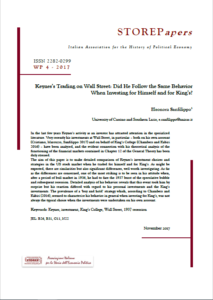 Eleonora SANFILIPPO, “Keynes’s Trading on Wall Street: Did He Follow the Same Behavior When Investing for Himself and for King’s?“

In the last few years Keynes’s activity as an investor has attracted attention in the specialized literature. Very recently his investments at Wall Street, in particular – both on his own account (Cristiano, Marcuzzo, Sanfilippo 2017) and on behalf of King’s College (Chambers and Kabiri 2016) – have been analyzed, and the evident connection with his theoretical analysis of the functioning of the financial markets contained in Chapter 12 of the General Theory has been duly stressed.
The aim of this paper is to make detailed comparison of Keynes’s investment choices and strategies in the US stock market when he traded for himself and for King’s. As might be expected, there are similarities but also significant differences, well worth investigating. As far as the differences are concerned, one of the most striking is to be seen in his attitude when, after a period of bull market in 1936, he had to face the 1937 burst of the speculative bubble and subsequent recession. Detailed analysis of his behavior reveals that this event took him by surprise but his reaction differed with regard to his personal investments and the King’s investments. The prevalence of a ‘buy and hold’ strategy which, according to Chambers and Kabiri (2016), seemed to characterize his behavior in general when investing for King’s, was not always the typical choice when the investments were undertaken on his own account.