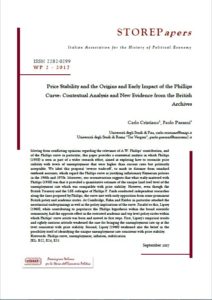 Carlo CRISTIANO and Paolo PAESANI, “Price Stability and the Origins and Early Impact of the Phillips Curve: Contextual Analysis and New Evidence from the British Archives“

Moving from conflicting opinions regarding the relevance of A.W. Phillips’ contribution, and of the Phillips curve in particular, this paper provides a contextual analysis in which Phillips (1958) is seen as part of a wider research effort, aimed at exploring how to reconcile price stability with levels of unemployment that were higher than current rates but politically acceptable. We label this proposal ‘reverse trade-off’, to mark its distance from standard textbook accounts, which regard the Phillips curve as justifying inflationary Keynesian policies in the 1960s and 1970s. Moreover, our reconstruction suggests that what really mattered with Phillips (1958) was that it provided a quantitative estimate of the unique (and low) level of the unemployment rate which was compatible with price stability. However, even though the British Treasury and the LSE colleague of Phillips F. Paish conducted independent researches along the lines proposed by Phillips, the curve met with early opposition from some prominent British policy and academic circles. At Cambridge, Kahn and Kaldor in particular attacked the neoclassical underpinnings as well as the policy implications of the curve. Parallel to this, Lipsey (1960), while contributing to popularize the Phillips hypothesis within the broad scientific community, had the opposite effect in the restricted academic and top level policy circles within which Phillips’ curve article was born and moved its first steps. First, Lipsey’s empirical results and rightly cautious attitude weakened the case for bringing the unemployment rate up at the level consistent with price stability. Second, Lipsey (1960) weakened also the belief in the possibility itself of identifying the unique unemployment rate consistent with price stability.