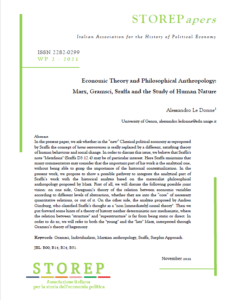 In the present paper, we ask whether in the “new” Classical political economy as reproposed by Sraffa the concept of homo oeconomicus is really replaced by a different, satisfying theory of human behaviour and social change. In order to discuss this issue, we believe that Sraffa’s note “Metafisica” (Sraffa D3.12.4) may be of particular interest. Here Sraffa maintains that many commentators may consider that the important part of his work is the analytical one, without being able to grasp the importance of the historical contextualization. In the present work, we propose to show a possible pathway to integrate the analytical part of Sraffa’s work with the historical analysis based on the materialist philosophical anthropology proposed by Marx. First of all, we will discuss the following possible joint vision: on one side, Garegnani’s theory of the relation between economic variables according to different levels of abstraction, whether they are into the “core” of necessary quantitative relations, or out of it. On the other side, the analysis proposed by Andrea Ginzburg, who classified Sraffa’s thought as a “non [immediately] causal theory”. Then we put forward some hints of a theory of history neither deterministic nor mechanistic, where the relation between “structure” and “superstructure” is far from being static or direct. In order to do so, we will refer to both the “young” and the “late” Marx, interpreted through Gramsci’s theory of hegemony.

Keywords: Gramsci, Individualism, Marxian anthropology, Sraffa, Surplus Approach
JEL: B00; B14; B24; B51 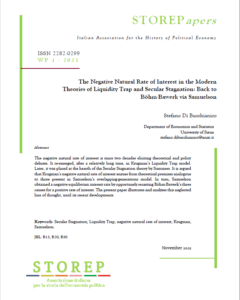 Stefano DI BUCCHIANICO, “The Negative Natural Rate of Interest in the Modern Theories of Liquidity Trap and Secular Stagnation: Back to Böhm-Bawerk via Samuelson“