Machines, Bodies and Invisible Hands Metaphors of Order and Economic Theory in Adam 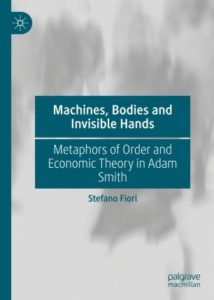 What was Adam Smith’s intellectual laboratory? How did his economic theory take shape? Were his metaphors of order only residual and ornamental expressions? This book answers these questions by analyzing the formation of the concepts of market and social order in Adam Smith’s work, by considering various aspects of his approach. It analyzes how metaphors and pre-analytical concepts influenced Smith’s theory. In line with studies that deal with the cognitive role of metaphors in science, this book suggests that in Smith’s work metaphors provided a framework, on which basis the theory subsequently developed. Therefore, as such they were part of that intellectual process which made possible the formation of structured concepts.

The content and scope of the book permits a more comprehensive interpretation of Smith’s thought, in which many aspects of his work are taken into consideration in order to explain a crucial problem for Smith: the nature and causes of social and economic order. The book also shows that in general, formation of theories is a complex process that includes pre-analytical views as non-residual parts of inquiry.

Stefano Fiori teaches economics in the Department of Economics and Statistics “Cognetti de Martiis” University of Torino, Italy. His research fields focus on the history of economic thought and on the connection between philosophy, economics, and other social sciences, viewed in historical perspective. His scientific interests include pre-classical and classical economics, Austrian economics, institutional and new institutional economics, economic methodology, and theories of bounded rationality.

The Metaphor of the Machine
Pages 31-63

Smith and the Organic Metaphors
Pages 65-86

Visible and Invisible Orders: The Secrets of Organization

Paradigms of Order in the Seventeenth Century: Intelligibility as Visibility
Pages 111-134

The Invisible Order: Imagination, Nature and the Economic Sphere
Pages 135-162

Forms and Experiences of Time