After Marco Dardi in 2017 and Harro Maas in 2018, Richard Arena will give the third “Raffaelli Lecture” at the 2019 STOREP conference in Siena. The title of the lecture is: “Léon Walras and Alfred Marshall: microeconomic rational choice or human and social nature?“.

Richard Arena is presently full professor of economics at the University Côte d’Azur in Nice (France) and managing editor of the Revue d’Economie Industrielle. His research areas include history of economic analysis; economic methodology and philosophy; industrial organization and policy; macroeconomic business cycle theory; theory of money and finance and more recently history of art and science. He is a member of the Groupe de recherches en économie, droit et gestion (University Côte d’Azur and Centre National de la Recherche Scientifique) and of the Superior Institute of Economics and Management Science.

He is an assessor of AERES (Agence d’Evaluation de la Recherche et de l’Enseignement Supérieur), and HCERES (Haut Comité d’Evaluation de la Recherche et de l’Enseignement Supérieur), in France, since 2012. He has been the chair or a member of various academic scientific committees, of various academic administrative and research boards, appointment committees and of French National Appointment Committees for full professors of economics. He has been a permanent member of the scientific Committee of the French and then the ESHET European summer university in History of economic thought and economic history and philosophy, since 1999; Member of teaching staff at the Centre for Advanced Economic Studies, Trieste, Italy, regular Summer Schools 1983-1989. He also has been Member of teaching staff at the Post-Keynesian Summer School of the University of Tennessee, US, 1988 and 1990. He was also member of the teaching staff and organising committee of the Summer Schools on the Dynamics of the Wealth of Nations, University of Cambridge, UK, Selwyn College, 1995-1997; 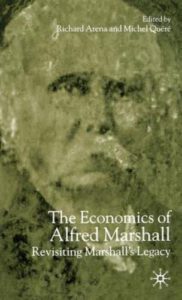 He has been associate editor of Metroeconomica, the Journal of Post-Keynesian Economics (USA), Economia dei Servizi (Italy), L’Industria (Italy), Panoeconomicus (Serbia), the Journal of the History of Economic Thought (USA) (till 2011), History of Economic Ideas (Italy) (till 2014); co-Editor of Cahiers d’Economie Politique, Economie et Institutions, Economia Politica (Italy) and Revue d’Economie Politique (France) (till 2010). He was the editor or the coeditor of 15 books in publishing houses as Cambridge University Press, Edward Elgar, Routledge, Ashgate, Palgrave MacMillan, Springer and Presses Universitaires de France or Economica. He edited 11 special issues of academic journals. He published about 80 papers in various academic journals and 85 chapters in academic books.