The 14th STOREP Annual Conference takes place in Piacenza, a city in Emilia-Romagna (Northern Italy). To get information about the historical and cultural attractions of the town, and in general for tourism, visit the website of Comune di Piacenza.
The program of the Conference includes a number of social activities, namely:

Participants are required to pay in advance (when registering for the Conference) for the Social dinner, if they wish to participate (at a cost, also for accompanying persons, of 50 EUR).

The cost of the Sightseeing Tour is 20 EUR per person (to be paid at the Conference desk).
Participants who are interested in taking the tour are required to book themselves by sending an email (expressing their intention to take the tour) to segretario@storep.org. Note that participants are also required to specify whether they want to visit exclusively the Castello di Torrechiara or to combine this tour with a visit to Galloni Ham Factory (the tour will implement the most preferred option between the two). 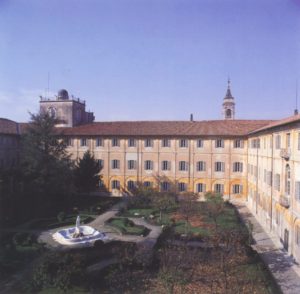 Collegio Alberoni is no doubt one of the oldest and most legendary institutions of Piacenza.
Founded in 1732 by Pope Clemente XII through the personal initiative of Cardinal Giulio Alberoni (1664-1752) from Piacenza, it was inaugurated in 1751. Since the beginning, it has been a seminary for poor aspiring priests under the direction of the Congregation of Missione di San Vincenzo de Paoli.

Well endowed with conspicuous financial resources of the cardinal from its founding date, Collegio Alberoni has become a renowned center of theological, philosophical and scientific study.

The large complex is located in Via Emilia, right in front of the Università Cattolica del Sacro Cuore di Piacenza, and through the centuries has come to include a laboratory of physics and one of natural science, since 1802 a seismic and meteorological observatory (still functioning today).
The excellent reputation of Collegio Alberoni has continued to increase through the centuries. The solid scientific and liberal arts education, as well as the theological one, preparation, has guaranteed an excellent future for many illustrious personalities, such as: Gian Domenico Romagnosi, Melchiorre Gioia, Francesco Biondelli and the future cardinals Agostino Casaroli, Sivio Oddi, Opilio Rossi, Antonio Samorè and Luigi Poggi.
There is also a very large library in Collegio Alberoni containing over 130,000 volumes. 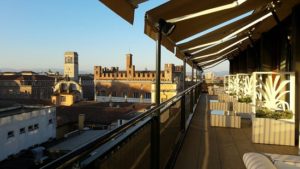 At the end of the Conference, participants can choose to visit Castello di Terrachiara and the Salumificio “Ditta Galloni di Langhirano”. Piacenza and its province are known for the production of seasoned and salted pork products. The main specialities are pancetta (rolled seasoned pork belly, salted and spiced), coppa (seasoned pork neck, containing less fat than pancetta, matured at least for six months) and salame (chopped pork meat flavoured with spices and wine, and made into sausages). Visitors of the salumificio can buy salted pork products. 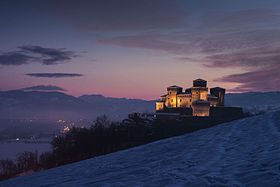 Strada Castello – 10 – Torrechiara – Langhirano – PR – 43013
Phone: +39 0521355255 (ticket office) – 0521355009 (Tourist Office) Fax: +39 0521355821
E-Mail: iat@comune.laghirano.pr.it
Set on a high perch overlooking the Parma valley, Torrechiara is one of the best preserved fortifications in whole the region. It was built between 1448 and 1460 by Pier Maria Rossi, who had it girded with a triple wall and four corner towers linked by battlemented parapets. Two loggias on the east side were added later. Inside, a fine square bailey abut on arcades and windows trimmed with elaborate Lombard style terracotta moldings.
In the San Nicomede Oratory, at the base of the southeast tower and in the ensuing rooms are several 16th century frescoes attributed to Cesare Baglione and his circle. In the northeast tower, beautiful frescoed halls include an ancient kitchen while in the northern block the Salone degli stemmi was decorated by Baglione, who also executed the fresco cycle in the Salone degli Acrobati (Acrobats Room) in the style of mannerism.
The most striking among the decorated rooms is the Camera d’oro (Golden Room), named after the pure gold that once trimmed the terracotta medallions set into the wall, whose fresco cycle dating to 1462 and attributed to Benedetto Bembo depicts a tale of courtly love and chivalry, recounting the story of Pier Maria Rossi’s passion for Bianca Pellegrini. It also carries two entwined hearts and the initials of Bianca and Pier Maria joined by a ribbon bearing the motto Nunc et semper. The Camera d’Oro looks onto the deep loggia built in late 16th century, when the castle lost its defensive purpose and was transformed into a lordly manor.
The castle is accessible for disabled person only with a guardian (some passages need a help).
The entrance of animals is not permitted. 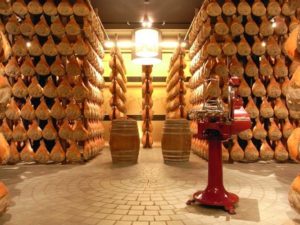 The production of genuine Parma Ham is the story of a special relationship between man and nature. Since Roman times, the unique conditions of the Parma region have made it possible to produce the highest quality hams that have been appreciated by gourmets for centuries. ‘Prosciutto’ is from the Latin ‘perexsuctum’ meaning ‘dried’ – an indication of the purity of Parma Ham production and its ancient roots.
It was in 100 BC that Cato the “Censor” first mentioned the extraordinary flavour of the air cured ham made around the town of Parma in Italy; the legs were left to dry, greased with a little oil and could age without spoiling. A tasty meat was obtained which could be eaten over a period of time while maintaining its pleasant flavour. Even earlier, in 5BC, in the Etruscan Po river valley, salted preserved pork legs were traded with the rest of Italy and with Greece.
The similarity between present-day Parma Ham and its ‘ancestor’ is evident and nowadays the tradition of Parma Ham is as strong as ever.

A brief history of Parma 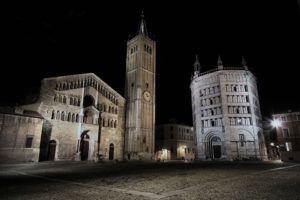 The origins of the city of Parma are extremely old: evidence of man dating back to the Lower Paleolithic time period was discovered in the hills of Traversetolo and in the montanto basin of the Taro river. Numerous terremare–stemming from terra mara or terra marna, mounds of blackish soil, formed by settlements enclosed by a bank and stream- were recovered in nearby provinces and are instead a testimony to the Bronze Age.

Founded in 183 A.D. by the Romans, Parma immediately became an important reference point for all of the surrounding plains: the construction of Via Emilia (187 A.D.) promoted a profound and rapid development of agriculture and of ovine breeding in all of the territories.
In 569 the city was conquered by the Longobardi family and became home of a Duchy. A new system of communication began to override the Roman order. The Parmense segment of Via Francigena was born. Castles and hospices were quickly springing up to insure that pilgrims and travelers were met with assistance and hospitality.

From the IX century, cloistered centers, predominantly Benedictine, encouraged a reclamation of the territory, and allowed for the recolonization and the restoration of agricultural land. The bishops progressively assumed temporal power and Parma provided two antipopes – Honorius II and Clement III – to the conflict between religious and political power on the ordinations.
The constitution of the Municipality, around the year 1140, signaled the beginning of the rebirth of the city after a period of Medieval turmoil.
Internal conflicts, between Papist families (Sanvitale, Rossi, Lupi) and Ghibellines culminated in the battle of 12480 and the defeat of the Emperor Federico II. Parma was later conquered by the Viscounts and dominated by the Sforza family (1440-1500), which imposed its rule by means of important noble families of Pallavicino, Rossi, Sanvitale, and Da Correggio.

From 1500-1521 the city was controlled by the French, then by the Church. In 1545 Pope Paul III, wanting to create a buffer state between the state of the Church and the Spanish power in Lombardy gave the Duchy to his illegitimate son PierLuigi Farnese. Thanks to their financial means and power, the Farnese family ruled for two centuries. During this time the city became an great capital, rich with monuments and works of art.
With the extinction of the Farnese family (1731), the Duchy was passed to Carlo of Spain, son of Elisabeth Farnese and Philip V and following the Peace of Aachen (1748), he was able to add a good portion of the lower regions to his territory.

Parma was then passed from Spanish control to French: the political reformer of this dynasty, supporter of the enlightenment culture, allowed the duchy to resume.
After 1759 the decisive action of Prime Minister Guillaume du Tillot imposed a modern state, founded on civil organization and industrial economy.
The Congress of Vienna of 1815 assigned the Duchy to Marie Louise of Austria, the second wife of Napoleon Bonapart, who governed from 1816-1847, starting an absolute state sovereignty comprised completely of non-native ministers.
The prestige of the “beloved Duchess” was such that the Duchy was not affected by the first Risorgimento movements. In 1847, with the death of Marie Louise, the Duchy returned to the Bourbon family. The plebiscite of 1860 declared the annexation of the former Duchy of Parma to Piedmont and then into the unified Kingdom of Italy.

With the construction of a unitary state, Parma was greatly affected by the demotion from head of state to a simple capital of a province, and experienced grave social and economic crises.
At the beginning of the 1900s Parma saw the diffusion of unions and socialist organizations and strongly opposed to the Fascist regime that was spreading throughout Italy. The struggle with Fascism culminated in its most dramatic moment in August 1922, when Italo Balbo attempted to enter the popular neighborhood Oltretorrente. The citizens organized themselves and were able to ward off the soldiers with their famous barricades.

During the Second World War, the enormous damages caused by bombings and numerous battles prompted the formation of a zone controlled by partisans until the liberation on 25 April 1945, especially in the valleys of the Taro and the Ceno rivers. The reconstruction and the economic development after the war helped Parma regain its original splendor. The city started to prove itself in the food industry and resumed its position in the cultural and artistic world, also thanks to the relaunching of its heritage and traditions.
Since 2003 Parma is the headquarter of the European Food Security Authority (EFSA).
In december 2015 it has been designated Unesco Creative City of Gastronomy.
In 2017 Parma celebrates 2200 years since its foundation.