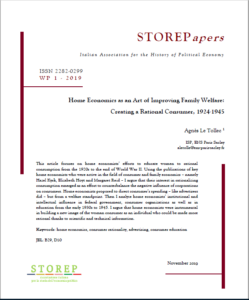 This article focuses on home economists’ efforts to educate women to rational consumption from the 1920s to the end of World War II. Using the publications of key home economists who were active in the field of consumer and family economics – namely Hazel Kyrk, Elizabeth Hoyt and Margaret Reid – I argue that their interest in rationalizing consumption emerged as an effort to counterbalance the negative influence of corporations on consumers. Home economists proposed to direct consumer’s spending – like advertisers did – but from a welfare standpoint. Then I analyze home economists’ institutional and intellectual influence in federal government, consumer organizations as well as in education from the early 1930s to 1945. I argue that home economists were instrumental in building a new image of the woman consumer as an individual who could be made more rational thanks to scientific and technical information.