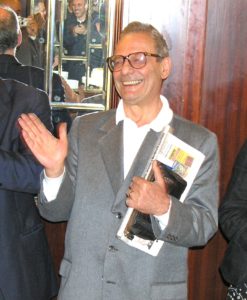 It was with great sorrow that we learned of the passing of Terenzio Cozzi. Those of us who knew him directly cannot forget his amiability, friendliness, and kindness.

In his long and rich career, we remember him first and foremost as the first President of STOREP (as well as founder together with other friends and colleagues).

Of Venetian descent, Cozzi graduated from Università Cattolica del Sacro Cuore di Gesù (Milan) in 1962 with professor Siro Lombardini. He got a Ph.D. from Cambridge in 1969 under the supervision of Richard Goodwin. He was full professor of Political Economy at the Faculty of Political Science of the University of Turin, where he was appointed professor emeritus in 2012.

He has written numerous scientific publications on dynamic analysis within Keynesian theory. He is also the author of several widely circulated textbooks.

He was a person of great affability and balance, who always defended and promoted heterodox economics in all the institutional positions he held.