STOREP at the Festival for New Economic Thinking

The Festival brings together organizations and individuals that seek to improve the way economics is taught, studied, and practiced. It provides a forum to share ideas and resources with students, academics, and the wider public.

With content from many organizations within the same large event space, participants can explore exhibits, watch screenings, take part in workshops, and learn from inspiring speakers. Actively celebrating and embracing different perspectives and schools of economic thought, the Festival for New Economic Thinking aims to provide fertile ground for the future of economics.

Why Do Economists Need History of Economic Thought?

Storep proposes a round table about the importance of HET in understanding and studying economics and promoting a scientific debate between contending paradigms. The session will explore why and how HET can help research to gain more awareness of diversity in approaches to economics ideas and problems.

Full Professor of Economics, Roma Tre University
Short Bio
Antonella Stirati is currently professor of Economics at Roma Tre University. She studied economics at the University of Siena (laurea in Scienze Economiche), Cambridge UK (M.Phil degree) and La Sapienza (PhD). Her research interests are in the development of the Classical-Keynesian approach, particularly in the fields of output and employment determination, income distribution, and unemployment. She wrote a book on The Theory of Wages in Classical Economics (Elgar, 1994), co-edited the three-volumes collection Sraffa and the Reconstruction of Economic Theory, (Palgrave-macmillan, 2013) and published a number of articles in academic journals and collected volumes. Her article on Inflation, Unemployment and Hysteresis has been selected as one of the best 25 articles published in the Review of Political Economy since the journal was first issued. She is also active in scientific popularization and intervenes in public debates on current issues. She co-edits the on-line journal Economia e politica.
_____________________________________

Research fellow, Sapienza University of Rome
Short Bio
Giulia Zacchia is research fellow in economics at the Department of Statistics of Sapienza University of Rome, where she collaborates with Minerva – Laboratory on Gender Diversity and Gender Inequality (https://web.uniroma1.it/labminerva/en). She holds a PhD in History of Economic Thought from the University of Macerata (Italy). Her research interests extend to social and financial inclusion in a gender perspective, but also cover gender gaps in academia, in particular in economics. She has worked with Fondazione Risorsa Donna on women’s empowerment, financial literacy and microfinance. She is one of the coordinators of the Working Group on Gender Economics for the Young Scholars Initiative INET. She is also a member of the Gender Equality Committee of the Italian Economic Association (SIE).
giulia.zacchia@uniroma1.it
___________________________________

Moreover… STOREP collaborated with Rethinking Economics Torino in creating a survey – “History of Economic Thought among Young Economists” – to be presented and circulated at the Festival. 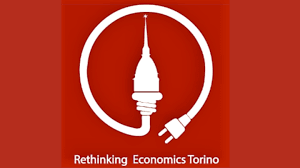