Economic Theory in the Twentieth Century, An Intellectual History – Volume I
1890-1918. Economics in the Golden Age of Capitalism
Roberto Marchionatti 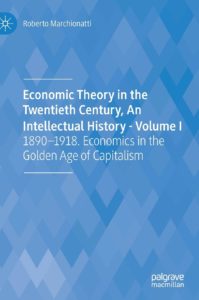 This book, set out over three volumes, provides a comprehensive history of economic thought in the 20th century with special attention to the cultural and historical background in the development of theories, to the leading or the peripheral research communities and their interactions or controversies, and finally to an assessment and critical appreciation of economic theories throughout these times. It takes as its subject matter the canon of publications by major thinkers who self-consciously conceived of themselves as ‘economists’ in the modern academic sense of the term. It is a history of how, when and where the discipline of Economics took root in major universities and scientific communities of economists, and evaluates the emergence of different ‘schools’ of thoughts.

Volume I addresses economic theory in the golden age of capitalism. It considers the contributions of Marshall, Pareto, Wicksteed, Schmoller, Bohm-Bawerk, Schumpeter, Wicksell, Fisher, Veblen and other major thinkers, as well as the universities of Cambridge, Lausanne, Vienna, Berlin, and some others in US, before concluding with a look at the impact that the great war had on the discipline.

This work provides a significant and original contribution to the history of economic thought and gives insight to the thinking of some of the major international figures in economics as shown in major works published across the last 130 years. It will appeal to students, scholars and the more informed reader wishing to further their understanding of the history of the discipline.

Roberto Marchionatti is Professor of Economics at the Department of Economics and Statistics, University of Turin, Italy and Fellow of the Accademia delle Scienze di Torino, Italy. He has been Visiting Scholar at the University of New York, USA and University of Cambridge, UK, and he is Life Member of Clare Hall, Cambridge University. He is Editor of Annals of Fondazione Luigi Einaudi: An Interdisciplinary Journal of Economics, History and Political Science, and he has been co-editor of History of Economic Ideas. He has published over 40 journal articles, and more than 15 books as well as a great number of contributions to edited volumes.

Table of contents (9 chapters)
General Introduction: Why Should We Study the History of Economic Theory?, Pages 1-11
Introduction, Pages 15-36
Economics in Cambridge: Alfred Marshall, the Old Cambridge School, and Their Opponents in England, Pages 37-88
Economics in Lausanne: Vilfredo Pareto and the Lausanne School, Pages 89-128
Economics in Berlin and Vienna: A Mosaic of Theories and Research Programs, Pages 129-193
Economics in the European Peripheries, Pages 195-218
Economics in the United States: Between Classicism, Neoclassicism, and Institutionalism, Pages 219-265
Great Controversies, Pages 267-297
The Great War and the End of an Era, Pages 299-302