The Statute of STOREP (art. 7) allows the possibility to grant members of the Association the status of Honorary Member, in virtue of the high scientific impact and quality of their contributions to the history of political economy, as well as of their activities to promote the study, research, and diffusion of the history of economic thought.

The Executive Committee has unanimously proposed to STOREP members to appoint Prof. Ghislain Deleplace (Emeritus Professor of Economics at University Paris 8 at Saint-Denis, France) Honorary Member of the Association. A formal vote by the General Assembly in the Siena Annual Conference, on June 28, 2019, unanimously ratified the appointment.

Prof. Ghislain Deleplace contributed with first-class research to the history of monetary thought (Steuart, Ricardo, Marx, Keynes, Sraffa), the history of the international monetary system (sixteenth century, nineteenth century), and the Post-Keynesian theory of money. Ghislain Deleplace has directed the economics laboratory at University Paris 8 at Saint-Denis, and he has been a member of the editorial board of Cahiers d’économie politique. After receiving a PhD in economics at Paris-Sorbonne, he has taught at the Universities of Amiens and Orléans. He has been visiting professor at the New School for Social Research, New York, State University of Moscow, and Nankai University, Tianjiin. 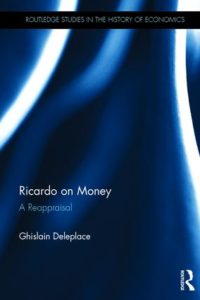 Among his books are Private Money and Public Currencies (Routledge 1994, with Marie-Thérèse Boyer-Xambeu and Lucien Gillard), Money in Motion: The Post Keynesian and Circulation Approaches (Palgrave 1996, ed. with Edward J. Nell), Histoire de la pensée économique (Dunod 1999; 3rd ed. 2018). He also edited the special issues of Cahiers d’économie politique on David Ricardo, 199 ans après (55, 2008) and on Monnaie et étalon chez Ricardo (23, 1994), as well as the one of Revue Economique on Monnaie bancaire, étalon-or et change (45, 1994). He has recently published Ricardo on Money. A Reappraisal (Routledge 2017). His work “An unpublished letter of David Ricardo on the double standard of money” (with Ch. Depoortère & N. Rieucau), published in The European Journal of the History of Economic Thought (20, 1, 2013: 1-28), has been granted the ESHET “Best article” Award of 2013.

His activities to promote research in the history of economic thought include the organization of workshops and conferences at the local, national and international level – in particular, he organized the Colloque international (June 3-5, 1983) «L’hétérodoxie dans la pensée économique: Marx, Keynes, Schumpeter»; presented articles were published in a special issue of Cahiers d’économie politique, 10-11, 1985, with P. Maurisson).

Long date member of STOREP, Ghislain Deleplace has notably been a member of evaluation committes for STOREPgrants for innovative, small-scale research in the history of economic thought and the history of economics, and offered original contributions for the special session on Marcello De Cecco’s Money and Empire of the 2017 STOREP Annual Conference in Piacenza, as well as for the special session on the thirtieth anniversary of Anna Carabelli’s On Keynes’s Method in the 2018 Annual Conference in Genova.