This textbook explains comprehensively and in rigorous detail not only mainstream microeconomics, but also why many economists are dissatisfied with major aspects of it, and the alternative that they are exploring in response: the Classical-Keynesian-Kaleckian approach. This advanced yet user-friendly book allows readers to grasp the standard theory of consumers, firms, imperfect competition, general equilibrium, uncertainty, games and asymmetric information. Furthermore, it examines the classical approaches to value and income distribution advocated by Adam Smith, David Ricardo and Karl Marx, as well as Post-Keynesian pricing theory, and the microeconomics of variable capacity utilization. Using simple models, it highlights the analytical roots of the important differences between the marginal/neoclassical approach and the classical-Keynesian, critically examining the plausibility and reciprocal consistency of their assumptions.

The book also addresses various microeconomic issues not generally included in advanced microeconomics textbooks, including differential land rent, joint-production long-period pricing, capital theory from Walras to the Cambridge debates, the foundations of aggregate production functions, the microeconomics of labor markets, and the long-period theory of wages. Lastly, it presents a unique re-evaluation of welfare economics. 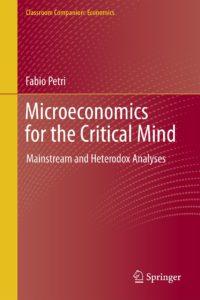 Intended for advanced undergraduate and graduate microeconomics courses, this textbook offers a comprehensive introduction to the various approaches and different schools of thought currently competing in the context of economic theory. It can also be used in courses on value and distribution, heterodox economics, and the history of economic analysis. In the present situation, characterized by scientific uncertainty and the co-existence of competing approaches, it will stimulate students to form their own opinion as to which approach appears more promising from a scientific standpoint.