Ideas in the History of Economic Development 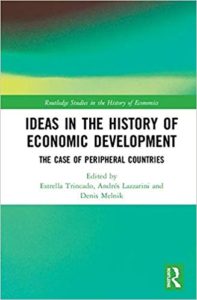 This edited volume examines the relationship between economic ideas, economic policies and development institutions, analysing the cases of 11 peripheral countries in Europe, Latin America and Asia across the 19th and 20th centuries.

It sheds light on the obstacles that have prevented the sustained economic growth of these countries and examines the origins of national and regional approaches to development. The chapters present a fascinating insight into the ideas and visions in the different locations, with the overarching categories of economic nationalism and economic liberalism, and how they have influenced development outcomes.

This book will be valuable reading for advanced students and researchers of development economics, the history of economic thought and economic history.

Part I – Europe
1 Degrees of abstraction in development economics
Vladimir Avtonomov
2 Debates on Development in the Spanish economy, 1848-1960
Elena Gallego and Estrella Trincado
3 Development economics in Portugal
Carlos Bastien and Ana Bela Nunes
4 Italian economists, paradigmatic revolutions and development issues in Italy in the last quarter of the nineteenth century
Simona Pisanelli
5 Soviet development model: A history of interpretations
Denis Melnik
6 Development issues in the Economic Thought of the European Periphery: The Case of Bulgaria from the mid-nineteenth century to the mid-twentieth century
Pencho D. Pechev

Part III – Latin America
11 From Developmentalism to Neoliberalism in Latin America
Matías Vernengo
12 Redistribution, Growth, Structural Change and Dollarization: Understanding Ecuadorian perspectives
Marco Missaglia
13 The Politics of Economic Development: Latin America Through the Eyes of Albert O. Hirschman
Andrés M. Guiot-Isaac
14 An Alternative Demand-Led, Structuralist Interpretation of the Economic ‘Golden Era’ in Argentina (1870-1930)
Fabián Amico and Numa Mazat
15 The rise and fall of economic development preoccupations in Argentina and the turn toward neoliberalism in the 1970s
Andrés Lazzarini and Gabriel Brondino
16 The place of institutions in Latin American development: From Prebisch to Dependency Theory and beyond
Roberto Lampa