Essays on Theories of Value in the Classical Tradition
Ajit Sinha 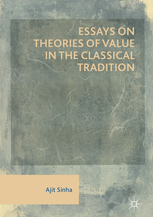 This collection of essays invites the reader to trace the intellectual journey of the author from his early incisive exploration and critique of key categories in Marxian economics, through his insights into classical economic theory, culminating in his pioneering and definitive reading of the economics of Sraffa. Where the author’s position has significantly changed he provides notations and explanations, and the addition of two new chapters written especially for this volume complete the scholarly journey. Following three decades worth of study, this book brings together a set of important contributions that not only give historical perspective but makes them convenient and accessible for students and researchers today.

“This volume revisits the foundations of classical political economy and outlines on that basis a new research paradigm. Ajit Sinha presents an extremely ambitious and challenging work that opens new and invaluable vistas on classical economic theory and economics at large.”
Roberto Scazzieri, Professor of Economic Analysis, University of Bologna and National Lincei Academy, Italy.

“For a quarter of a century Ajit Sinha has worked on the classical theory of value, reinterpreting Adam Smith, David Ricardo and Karl Marx in terms of his own original, and often contested, interpretation of Piero Sraffa. This fascinating volume brings together several of Sinha’s most perceptive and most contentious papers. Always scholarly, stimulating and provocative, it is essential reading for anyone with an interest in classical value theory.”
John King, Emeritus Professor, La Trobe University, Australia.

Ajit Sinha is Professor at Azim Premji University, Bangalore, India. He has published extensively in the area of history of economic theory. His first book, Theories of Value from Adam Smith to Piero Sraffa, was published in 2010 by Routledge. This latest volume succeeds his most recent and highly regarded book, A Revolution in Economic Theory: The Economics of Piero Sraffa (Palgrave Macmillan, 2016).

By the same author:

Theories of Value from Adam Smith to Piero Sraffa 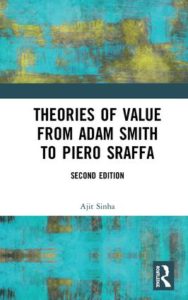 This book presents a comprehensive account of more than 200 years of controversy on the classical theories of value and distribution. The author focuses on four, perhaps most critical classics — Adam Smith’s Wealth of Nations, David Ricardo’s Principles of Political Economy, Karl Marx’s Capital and Piero Sraffa’s Production of Commodities by Means of Commodities. The book highlights several significant differences in the widely celebrated theories of the four authors as it searches for the ‘classical standpoint’ that separates them from the ‘moderns’. It also challenges canonical interpretations to analyse their flaws and weaknesses, in addition to the already obvious strengths, and critically engages with the major alternative interpretations and criticisms of the theories.
With a new Afterword that follows up on the debates and developments since the first edition, this book will appeal to scholars and academics of economic theory and philosophy, as well as to the general reader.