Take bus 39 or 40 (every 7 minutes ca.) from Genova Brignole Railway Station to the city center and get to (stop in front of) the Albergo dei Poveri in about 15 minutes. From city center (stops: piazza De Ferrari; via Roma; piazza Portello – back: p. Fontane Marose -; Largo Zecca; p. della Nunziata): about 10 minutes.

From Genova Principe Railway Station: 15 minutes walk through via Balbi. Once in Palazzo dell’Università, take the elevator to the third floor, cross the Botanical Garden and reach the Albergo dei Poveri.

Genova is the capital of the Italian region of Liguria and the sixth-largest city in Italy. Located on the Gulf of Genoa in the Ligurian Sea, Genoa has historically been one of the most important ports on the Mediterranean: it is currently the busiest in Italy and in the Mediterranean Sea and twelfth-busiest in the European Union. Genoa has been nicknamed la Superba (“the proud one”) due to its glorious past and impressive landmarks. Part of the old town of Genoa was inscribed on the World Heritage List (UNESCO) in 2006 as “Genoa: Le Strade Nuove and the system of the Palazzi dei Rolli”. The city’s rich cultural history in art, music and cuisine allowed it to become the 2004 European Capital of Culture. It is the birthplace of Christopher Columbus, Niccolò Paganini, Giuseppe Mazzini, Renzo Piano and Grimaldo Canella, founder of the House of Grimaldi, among others. 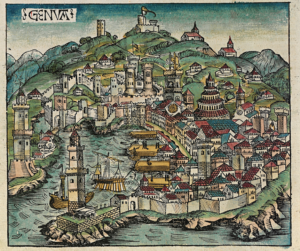 Genoa, which forms the southern corner of the Milan-Turin-Genoa industrial triangle of Northwest Italy, is one of the country’s major economic centers. The city has hosted massive shipyards and steelworks since the 19th century, and its solid financial sector dates back to the Middle Ages
Its Aquarium is the largest aquarium in Italy and among the largest in Europe. Built for Genoa Expo ’92, it is an educational, scientific and cultural centre. Its mission is to educate and raise public awareness as regards conservation, management and responsible use of aquatic environments.

From /for the airport:
www.airport.genova.it/en/transportation-airport/